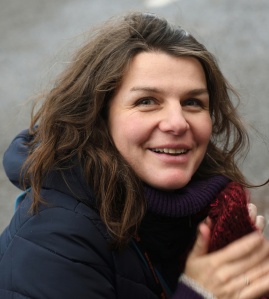 When I was twelve, I’ve been to Brazil with my parents and my younger brother for two years – my father was offered to give lectures on geophysics there. When I saw the poverty people live in there, it inspired me to be much more ambitious than I was before. After my return, I went to Podkovářská ceramics school. Then I applied to the Prague Academy of Fine Arts to Sculpture restoration studio, using my birthname Pšenčíková. In the second year I moved to the Figural Sculpture studio. From the beginning, I wanted to learn how to build a statue well, according to the human model. At that time, I did not do anything else but modelling, mold, and sculpting. Everything else went aside. No friends, no parties, no relationship. I was isolated from the world and honed the technique.

At that time, I discovered the Principles of life philosophy and started to work on myself. I found my first boyfriend and friends, and in parallel on the path of self-discovery, I began to see the contents of the statues again. The relationships I’ve lived have started to form in clay or stone, and for the first time I have been experiencing what it means to express myself in matter. Today I do not create other sculptures, I am interested mainly in human compositions that shows relationships between the people. Every such statue tells me about myself, it’s a piece of my story, and so the sculpture is the diary of my life.

After graduating from the Academy I got married and used name Hapalová. However, after five years of childless marriage I divorced. Today I’m married again and we have three children.

Creating a statue is a long process. The sculpture cannot be rushed, whether cutting into stone or modeling in clay. It is always a process that needs its time. Creation teaches me patience and perseverance and helps me to see places in my inner world that I find difficult to get to. By creating I materialize my own thoughts and processes and which I often do not really understand, and the sculpture helps me to see the connections that escape me.

We use cookies to ensure that we give you the best experience on our website. If you continue to use this site we will assume that you are happy with it.I understand